Take the first five Fermat numbers (numbers of the form $2^{2^n} + 1$, $n \in \mathbb{N}$) and multiply them together in all possible combinations (without repetition). You will get $2^5 = 32$ results. Write them in binary, ordered smallest to largest, and you'll see that that pattern of zeroes and ones is the beginning rows of Sierpinski's Triangle. 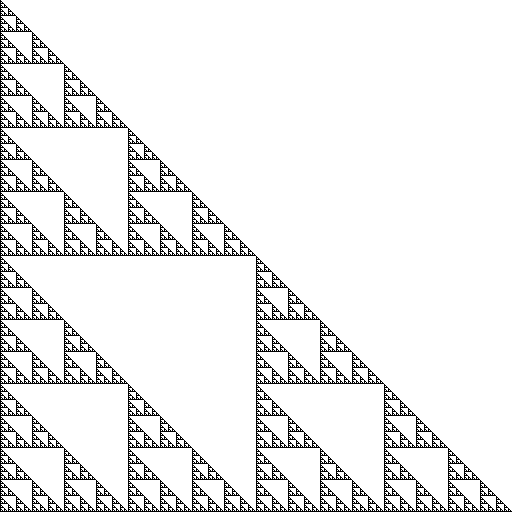 Wow! I learned this fact from a blog post and wanted to understand deeply why it was true. After I understood, I wanted to transmit my understanding in a way that wasn't just an explanation with words — so I made this demo. Some words follow anyway.

Split it apart: $x(10...01) = x(10...00) + x(1)$. We add some number of zeroes to the end of $x$, then add $x$ to the result. We've essentially replaced the leading $1$ of the Fermat number with a copy of $x$, while swapping out its last $\text{length}(x)$ digits with another copy of $x$. Copies of $x$ intrude from both sides, leading us to replicate the previous rows twice: one facing left, and one facing right. That's what gives rise to the fractal nature which is the hallmark of the triangle.

Note that this only works as long as there's enough space for the two copies not to interfere with one another; as long as we don't have to do any carries when we do the addition above. The Fermat numbers have an exponentially increasing number of zeroes between the 1s; if that number grew more slowly, there would be interference, since multiplying by each previous row each time means that we have an exponentially increasing number of rows to multiply by.

As far as I can tell, it took until 1977 (Hewgill) for this surprising relationship to be noticed. Hewgill's proof brings in Pascal's Triangle and its relationship to Sierpinski's, but I don't think that's necessary to see what's going on.

The first line of the triangle is 1, which isn't a Fermat number and can't be arrived at by multiplying Fermat numbers together. It does fit, however, as the empty product: the combination which consists of no Fermat numbers.

This project was made with Elm, a strongly-typed functional lanuage for the browser. Check out the repo.